THE VIDEO DEAD: I think this movie tried to kill me. 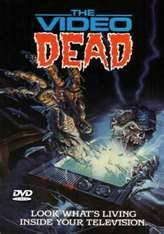 In THE VIDEO DEAD everything is dead. The story starts off promising then dies about ten minutes in without any hope of resuscitation. The acting was horribly eccentric and forced like bad community actors in a play written and directed by a five year old. I can't believe all these people were that bad as actors. They all had to have gone to Bad Acting Classes or something. Nobody can be that bad and not that many people all at once. It was more than a handsome old man such as myself could handle. I don't think the actors were intentionally trying to kill me with their poor acting skills but the director may have with all his awkward close ups capturing every forced unbelievable expression on their generic faces.

All the characters are about as interesting as a box of Post-It notes. In fact by the end of the movie you will hate them and rejoice in their demise knowing that with every death the movie slugs along closer and closer to its sure to be unimpressive finale. I was always curious about this film back in the day when I was a kid. It was one of those VHS covers that always caught my eye but never did I rent it. Too scary. Finally after twenty years I watched the damnable thing. It sucked. In fact THE VIDEO DEAD sucked so bad I'm pretty sure it took years off my life. Well it was nice knowing you folks.  Click here to read the rest....