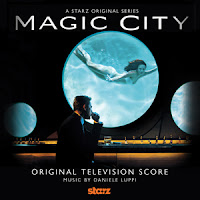 
Daniele Luppi’s loungy Mancini-esque score to the hit new STARZ series Magic City, emulates the sound of the late 50s and early 60s period. Set in Miami's Miramar Playa Hotel leading into the new year of 1959, hotelier Ike Evans (Jeffrey Dean Morgan) conjures up ways to finance his dream. He has essentially sold his soul to the devil, mob boss Ben "The Butcher" Diamond (Danny Huston). Ike's wife Vera (Olga Kurylenko), a former showgirl, and his three children think he is an honorable man, but he just can't break his pact with the most dangerous criminal in town. His life is a facade.