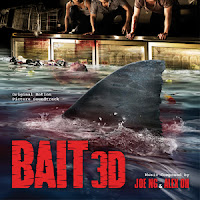 
Singaporean film scoring team Joe Ng and Alex Oh (The Maid, Rule Number One) enters a soundtrack genre that is forever associated with John Williams’ milestone score for Jaws – and contributes a great orchestral score for the Australian Bait 3D.Although the film, that opened theatrically in Australia and was released on DVD/Blu-ray in the USA last week, has been described in a lot of reviews as a typical B movie, the score is a mature and impressive score where elements of hard-hitting horror action is beautifully juxtaposed by beautiful, richly textured and melodic string writing. While a lot of horror scores only focus on the dread and violence, Bait 3D also underpins emotions such as love, loss and reflection.
Above all, this is an entertaining horror score from two composers who are probably new names to the international soundtrack audience, and Screamworks Records are proud to bring their first rate score to your attention!

5/5 Wonderfully Epic... you think you know what is in the water, think again!
-Jeremy [Retro-Zombie]
Hosted by Unknown at 12:00 AM