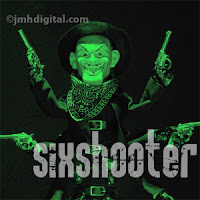 Puppet Master III: Toulon's Revenge is a 1991 direct-to-video horror film written by Charles Band, C. Courtney Joyner and David Schmoeller, and directed by David DeCoteau. It is the third film in the Puppet Master franchise, a prequel to 1989's Puppet Master and 1991's Puppet Master II, and stars Guy Rolfe as a puppeteer whose ability to animate lifeless material attracts the attention of the Nazis, whose members are played by Richard Lynch, Ian Abercrombie and Walter Gotell.

I think after this film the series loses it's way, but we can worry about that another day in puppet paradise.
-Jeremy [Retro-Zombie]