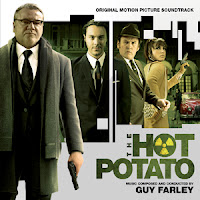 London’s East End, 1969: Our heroes Kenny (Ray Winstone) and Danny (Jack Huston) come into possession of a mysterious box which turns out to contain a large lump of weapons grade Uranium – a true Hot Potato!

Initially unaware of The Hot Potato’s true value they very quickly realise the danger they’ve been exposed to. Ably assisted by Danny’s girlfriend, the beautiful Carole (Lois Winstone) and shadowed at every turn by the unshakeable criminal Harry (Colm Meadey), Kenny and Danny reluctantly embark on a quest to offload the potato to the highest bidder.

MovieScore Media’s fifth album with the talented British composer Guy Farley presents a very elegant film music homage to the great caper scores of the 1960s and 70s. The Hot Potato, starring Ray Winstone, Colm Meaney and Jack Huston, takes place in 1969 and Guy Farley – himself a big fan of the film scoring aesthetics of that period – finds inspiration in the best of British soundtrack hip: John Barry, Laurie Johnson, Ron Grainer… The result is a very entertaining score with an infectious main theme and lots of underscoring for big band and orchestra.