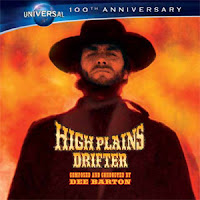 At long last! World premiere of complex, highly original score for justifiably famous Clint Eastwood western with director as star. Dee Barton scores with unusually strong minor key main theme in western garb, then heads into Lago (the town) with much more under his saddle! Complex, experimental ideas play on strings, guitars, harmonica, percussion, early synths, electric bass, voice... an array of tense, dissonant colors! But there's much more than what has been known up to now: Universal's multi-track scoring session masters revealed numerous orchestral cues in traditional western guise that filmmakers dropped in favor of vivid experimental cues. New ideas like "Dummy Wagon" bring broad, expansive themes into play, action cues such as "Gunfight", "Shooting Stacy" offer intense brass figures amongst chaotic strings, even a sturdy vocal version of main theme with orchestra adds color, all of these being heard for first time ever, illuminating fact that composer intended much longer score than what (admittedly effective) amount remains in finished production.

5/5 So you like spaghetti westerns, you will love this score from Dee Barton... from Intrada they as I have said in the past, "totally great releases this year"... they always have great stuff.
-Jeremy [Retro-Zombie]
Hosted by Unknown at 3:30 AM