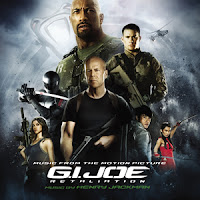 
G.I. JOE: RETALIATION features the G.I. Joe Team coming into a conflict with Zartan, Storm Shadow and Firefly, all serving under the newly released Cobra Commander. Zartan (who is still impersonating the President of the United States) frames all G.I. Joe operatives as traitors to the United States, exterminating most of them and leaving a small group of survivors. Zartan and the Commander now have all the world leaders under Cobra’s control, with their advanced warheads aimed at innocent populaces around the world.

5/5 I was not a fan of the first movie, really tried to get into it... really. That being said the score to the first film left a sour taste in my mouth. This being the second/sequel I am all ready getting a good vibe for me to get a bit more excited. Now let's talk about the score, it's a different score by a different composer and Henry Jackman pulls a few different strings to make this one worthy. He is becoming a composer to turn to if you want the action to rock, yet keep the pulse set on low until you are ready for the snake to strike. Grand Job!
-Jeremy [Retro-Z]

Of all the movie composers Hans Zimmer is my favorite. It sounds like this guy is an up and comer.